﻿﻿﻿I used to bake bread. Then at one point life seemed to intervene and I was rarely home all day or so I rationalized. Robert has missed the bread. In fact, he has taken to saying things like “when we’re snowed in it will be great to lounge in front of a cozy fire with a stack of good books and smell the bread baking. I take a hint as well as the next person, so I decided to get back into the habit before we’re into the snow doldrums and just to prove I haven’t lost the touch. So I have been baking bread the past two months, every week a different type.Other than Aunt Verna’s recipes, which were always first-rate, I tend to like two books by Beth Hensperger – “Beth’s Basic Bread Book” and “Baking Bread – Old and New Traditions”. She goes a long way to explain techniques, equipment, the difference between types of flours and yeasts, the process from A to Z, and my only complaint is that the pages are unseeminly falling apart at the seams so that it now resembles a loose leaf notebook. Last week I made a version of her Italian Country Bread from the second book (pages 42-43) with the addition of golden raisens and pecans (she suggests walnuts, but I will substitute pecans for walnuts any day) and I baked it in a traditional loaf pan for easy toast slicing instead of the usual free form round. It was great as toast, but I have to say it made (Robert made) the VERY BEST EVER FRENCH TOAST. I personally love French Toast and often order it if we happen to  go out to breakfast, so I feel I could qualify for a connoisseur of sorts. The bread should be able to be sliced quite thick and end up crusty on the outside and soft but not mushy in the middle. This was the ultimate, I think, and the flavor of the bread was perfect for this purpose.

Another favorite now, is the Maple, Oatmeal and Oat Bran Bread (same book, page 72) but here I must point out to Ms. Hensperger and to anyone who may follow my advice, that I found a printing error which wasn’t in itself disastrous, but did make a difference in my second try. I noticed that the 1 teaspoon of maple syrup called for in the first step as the sweetening to the yeast, didn’t accomodate the entire rest of the 1/2 cup of maple syrup that was listed in the “ingredients” section above and should have been included with the liquids in step two. So – whoops – my first loaf was just fine, but not as it should have been intended.

This week it’s Pain de Campagne (pages 43-44) the traditional French-style whole wheat country bread which is often decorated with reserved dough formed into braids, wheat sheaths, or a pile of round grapes, leaves and tendrils. That should be fun! But we’ll see about that.

Primarily I want to share a wonderful, creative guideline that I can’t take credit for, but belongs to my friend Linda Farrow who once baked bread for us at our restaurant in Ferndale, Ca – The Stage Door Cafe. Linda, who I am sad to say I have lost touch with over the years, loved to bake bread and I was so impressed with her results that I asked for some lessons and the following is what she shared. Basically it’s a formula that allows for ultimate creativity. It’s probably not for those who need to follow recipes to a T. It’s perfect for the type of cook who tends to say – “this handful looks to be about a tablespoon” or “I think a little extra Chinese 5 spice would be nice”. What it does is open up a world of possibilities and, most likely, emulates what our pioneer grandmas were doing when they utilized whatever they had on hand, although minus the equipment, of course.

First a note about equipment: You will need a stand mixer and a microwave. And if your mixer is a Kitchen Aid (according to Ms. Hensperger, and I have no reason to doubt her here) you may as well throw away your dough hook. It’s seems strange that such a good, standard brand would be amiss in their dough hook, but she says to use the paddle here for bread instead.

IN YOUR STAND MIXER, MIX TOGETHER THE FOLLOWING:  2 Cups flour: white, wheat or a combination; 2 T. yeast (note: the warm liquid will take care of the yeast in the overall mixing in the next step); 2 handfuls of salt in the “palm” (see what I mean); and any dried herbs or cheese (optional).

HEAT ALL TOGETHER IN A MICROWAVE FOR TWO MINUTES: 2 Cups of Liquid: which might include one or a combination of water, milk, potato water, beer, etc.; 1/4 Cup of yoghurt, cottage cheese, ricotta or sour cream; 2 T. oil (your choice); 2 T. to 2 Cups sweetener (brown sugar, molasses or honey).

POUR THE MICROWAVED LIQUID INTO THE DRY INGREDIENTS IN THE MIXER AND MIX TOGETHER.

DOUGH: Start adding flour, up to 3 1/2 to 4 Cups (white, wheat or a combo) 1/2 a Cup at a time and continue mixing until the dough comes away clean from the sides of the bowl.

PROCEED WITH A BIT OF KNEADING ON YOUR BOARD AND THE USUAL RISINGS AND BAKE.

ADDENDUM: As I was writing this, the Pain de Campagne was baking away. I had decided to daringly glaze on pieces of hastily pulled tendrils and round clumpy grapes and when I first checked the loaf at approximately 35 minutes it looked stunning! I thought it the most gorgeous, artful loaf I had ever seen.  I couldn’t believe it was my creation. But when I pulled it out at the appropriate time, I’m afraid instead of grapes and tendrils I had grapes of wrath – a bit too brown.  But the bread was wonderful! 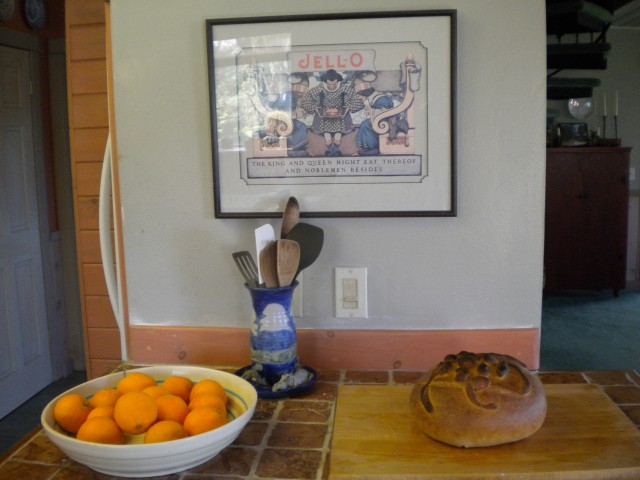 This entry was posted in food. Bookmark the permalink.