What with the peach blossoms and the crabapples and the flowering quince, I must admit I’m getting restless for the roses. I know I’m getting ahead of Mother Nature here but it’s been on my mind and rather than continually running to the garden to see if there just might be a first bloom, I thought I would sing the praises and dedicate the coming season to the Musk Rose, specifically the Himalayan which is intrepid and spectacular as you can see. It would be almost as difficult for me to name a favorite rose as designate a favorite child, but this one is right up there, and, to make a bad pun, as you can see, in more ways than one.

By some accounts it is said to climb over 30 feet and from my experience that may be a cautious estimate.  Needless to say it is a mighty scrambler that loves to climb trees.  I once had to caution a friend who reported with pleasure that she had purchased a small but attractive arbor for her garden and  planted a climbing Himalayan Musk at the base.  No! I cried. Not a good idea!  Then I explained that there might be a good reason why “Himalaya” is included in it’s name, for the rose quickly springs up more than ready for a serious trek and not a rolling meadow stroll.  The photo above shows it flinging it’s canes out over the second story deck, grasping for the nearby oak tree.

MUSK ROSE ABOVE THE FROG POND

The history of the Musk goes back to an ancient variety in the Middle East, “Rosa Moschata” which (so Peter Beales in his noted book “Roses” tells us) was probably introduced to Europe during the reign of Henry VIII.   This is what I particularly love about the heirloom roses, along of course with their beauty and fragrance and ability to  delight. It’s the ancient history and romance. This Rosa Moschata then, traveled who knows how – by caravan over the Silk Road? A cutting tucked in the cloak of a Knights Templar, back from the crusades, back to his Lady in Hertfordshire, England?  And then picked up by nurseryman William Paul towards the end of the last century, and using the chromosomes of the parent, created this hybrid which now climbs up to my second story and beyond. 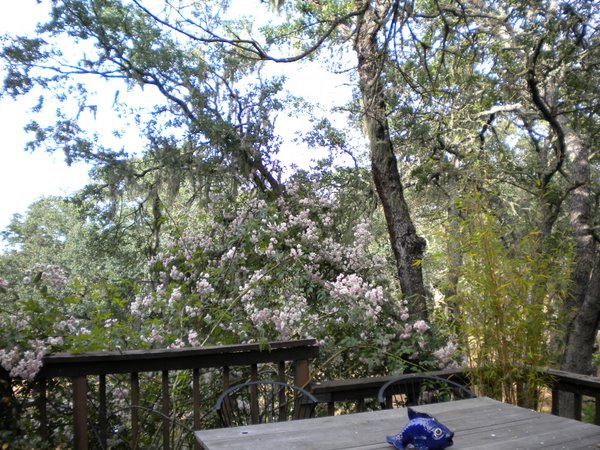 Every year I have to hack it back so that we may dine without its thorny long limbs encroaching on the deck but it, like most of the old roses, is most forgiving and just readjusts it’s trek in the other direction, making a nice companion for the oak.

When I first considered the issues of moving to Minnesota from California,  I must admit I had a moment of dread about the roses among other things. Every time we have moved  and there have been many, I have picked myself up reluctantly from a garden newly formed and hardly mature. And every time I began all over again, ordering my favorites, usually from the Heirloom Rose Nursery in St. Paul Oregon. This time I found the truth in what is said in Rosarian talk, that it takes at least 8 years for old heirloom roses to come into their own.  To really WOW you. To show you their full complexity and depth. This time its almost 12 years and the Rosarians were right. Every year the show has been getting better and better.  So now – to begin again in a totally different clime – well, I’m game, but how about my favorites!

And Yes. Thank you Mother Nature. It turns out that Paul’s Himalayan Musk is perfectly happy in the snows of Minnesota. And so one of his breed will be joining us there.

This entry was posted in Gardening. Bookmark the permalink.

3 Responses to THE HIMALAYAN MUSK