A WRINKLE IN TIME *

A WRINKLE IN TIME *

This past weekend began with the best of family gatherings in Carmel as planned, and continued the next day with another family gathering of a different sort, but also good because it was family.

Here we are together.

And here – hanging out. 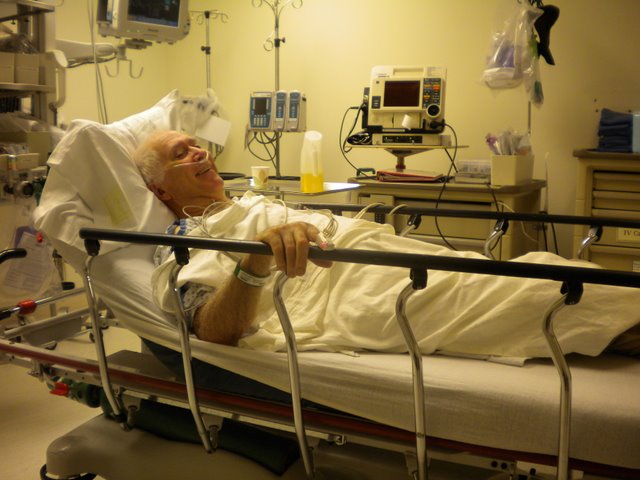 It turned out that his strange “heart issue” which he has been wrestling with for over 40 years, broke way beyond the bounds of acceptability and demanded attention. And that is the good and the bad of it.  Or rather, I should say the bad and the good of it, because I think we are finally “on to something”.

It was just this weekend when daughter/nurse, Sheila and I experienced the “issue” that caused us to race him to CHOMP (Community Hospital of the Monterey Peninsula).

Always in the past, when he had these “episodes” he would have to throw himself down on his back and hold his breath and gasp repeatedly and wait for it to pass. This time he experienced six “episodes” in succession, a new marker in the nature of scary progression.

In the past it was mainly a nuisance because it occurred infrequently. But you can imagine the issues it might conjecture in the grocery line, driving on the freeway, or at a restaurant, when he had to suddenly throw himself onto the ground. And it was at a charming restaurant in Carmel this weekend when it finally ground to a conclusion. And we were off to CHOMP.

CHOMP is the country club of hospitals. In the woods above Pebble Beach, next to Carmel, California and designed by the world famous architect, I. M. Pei, it sits like a Mayan temple among the trees. In the lobby under the magnificent glass dome, a koi pond with splashing water. One could sit there reflectively forever.

But beyond the glitz and the artistry, CHOMP (as the locals call it) is a first rate hospital. We have had personal experiences in the past.  I had some inner parts removed, for example. And Robert had his radiation therapy for cancer here, which was successful beyond our dreams. Some of our children have been admitted here for something as sensational as driving off a cliff and doing damage to oneself. Our grandchildren have been born here. So yes, we are fans.

It was a major revelation, then, when after all these years of fussing with the heart episodes that, count them – THREE doctors had the diagnosis just like that. Dr. Hage in Emergency, Dr.Dansky in Critical Decision Care and Dr. Lui, Cardiology all immediately had the answer.  Of course – it was PSVT (paroxysmal supra ventricular tachicardia). All about electrical pathways and changing the frequency.                          .

Suddenly I felt compromised in my surity about the move to Minnesota.  I felt first of course, bereft and terrified. With all the stresses and concerns of the past about the major issues that we would contend with upon such a big journey, this entered upon new territory.  This was huge. Yes, there were the concerns about packing and traversing the continent, about how we consign what goes and what stays, how we make peace with losing California and family here, how we just dare to make the jump.  But suddenly I was wondering if  this was going to be a major  glitch in the program, not just a wrinkle in time, but an enormous rift in it all? And of course, it was all about my traveling companion.

The good of it all, the positive transformation ahead, is that we were in the right place at the right time, ready to end this 40 year nonsense and be there at CHOMP next week for the “catheter ablation” which promises a possible 99.9% success.  Hopefully just a wrinkle.

*(Thank you to Madeleine L’Engel who wrote the book “A Wrinkle In Time”, which I loved and my children LOVED, that envisioned a journey so deep that it went not only into the fourth but the fifth dimension. And it too, was all about transformation, family and Love.)

This entry was posted in HEALTH, introspection. Bookmark the permalink.