Posted on April 9, 2011 by snowbirdredux

If there’s one thing I won’t miss after our move, it’s the turkeys.  They don’t actually belong in California  I believe, but because hunters some 30 or so years ago petitioned Fish and Game for the privilege of tromping about and shooting at the silly things, they are here.  For the most part they’re just a nuisance and the most we have to do is admonish guests and remind each other “Don’t step on the turkey poop!” for it is black tar that doesn’t wear well on the aqua carpet, and that’s the most of it.  But there have been occasion when they were far more than just a nuisance, at least in the case of two bruiser toms.

It seems that the big boys band together in family groups.  And I’m not sure how a bird with a seemingly small brain can recognize his cousins and uncles at will, but they do form each year what I call The Band of Brothers.  And in our neighborhood it seems there are usually two bands – something like the Sharks and the Jets.  You can see them early on, even as young tuffs, jockeying for position, pushing and chasing, sometimes even slinging each other about by the neck, until it is determined that one is the Alpha male of the band.  Because they are short lived, every year the number varies – seven in one gang and three in the other. Or ten to five.  But by mating season in the spring the ranks are settled and the games begin, with the sergeants helping the Big Boy in herding a hen.  Whenever the two gangs happen to cross paths – well then it’s a “rumble”.

They seem to do a lot of shrieking and chasing for the most part, mainly in circles, round and round, interspersed by abbreviated jumping up and down here and there.  It seems they should realize that there is no-way-out to safety within the bounds of the circle and simply take off hell-bent in another direction, but I’ve seen them go on and on, seemingly stuck in the rut of persuer and persued.

One day I witnessed an amazing turkey drama from my window, which began with one Tom (say from the Sharks) being chased by six Jets in the inevitable circle.  Around and around they went, gobble-shreiking all the time until two Sharks came slowly creeping around the corner of our house, looking in horror up the hill to the mayhem and horror of their kin’s predicament. In what seemed exaggerated “cartoon” fashion, they stopped, they gawked, you could tell, hardly believing their eyes, and suddenly jumped in place, spun round and high-tailed it as fast as they could back in the direction they had come. A short while later, the besieged Shark escaped the pack and  ran quickly down the hill in front of my window where he fell, tattered, pecked and exhausted upon the ground. Shortly the brothers came slowly and cautiously back, nervously circling their fallen comrade, and began pecking upon his crumbled form.  I thought – what is that about? Are they throwing in with the other gang?  Showing their loyalty and subservience and denying their heritage?  But no. As it turns out they were merely prodding him to stand, which he eventually and reluctantly did, and the three of them slumped off around the corner.

I, myself, have had two personal dramas with Toms.  One year there was a band of only two and the ringleader was brutal. It all began when he was standing on my newly planted Primulas and I deigned to say “SHOO”!  He not only didn’t take to that, he gobble-shrieked and charged me.  When I ran in the house, Robert at first didn’t believe that I would have run from a mere turkey.  But he soon found out when he encountered him minutes later on the front porch in full attack mode – flying forward, shrieking, like a kamikaze pilot intent on the goal – in spite of large rocks and shovels wielded upon his turkey body.  We found out that year, that there was only one thing that deterred the mad gangster, and that was WATER.  Rocks and shovels didn’t make him flinch, but a squirt from the hose had the coward running for the hills. So we often had to get to the car or the house, en garde with aqua.

One day I walked out to get the mail at the street, not noticing that the gangster and his henchman were strolling up from the lower drive. And just as I pulled the mail from the box, I heard the sickening “gobble”from behind and knew I was in deep trouble. They flew at me, both he and the gangster brother, with their necks outstretched, their spurs exposed, their gobble-shreiking ringing in my ears – and I ran backwards, flapping the mail in front of me, hoping I wouldn’t fall  and be set upon, and just SOMEHOW made it into the front door.  He must have made someone else’s life miserable that season, for he soon after disappeared and I saw his sad brother, despondent and all alone.

Last year there was another mad Tom, again of a band of two.  He had charged us going to the garage too many times, when one day I ran for the hose as Robert backed out the car and the turkey decided to attack the car!  Big mistake. I won’t describe the gruesome details, however as the car dodged back and forth, back and forth, and he flew into the side panel gobble-shrieking all the time – he succumbed to a fatal wound which rendered him down a peg or two and days later missing in action.

The hens usually graze along in a group, pecking the ground for bugs I suppose, or grains of the new grass. Or else they’re flying up to our second story deck to try to raid the bird feeders. 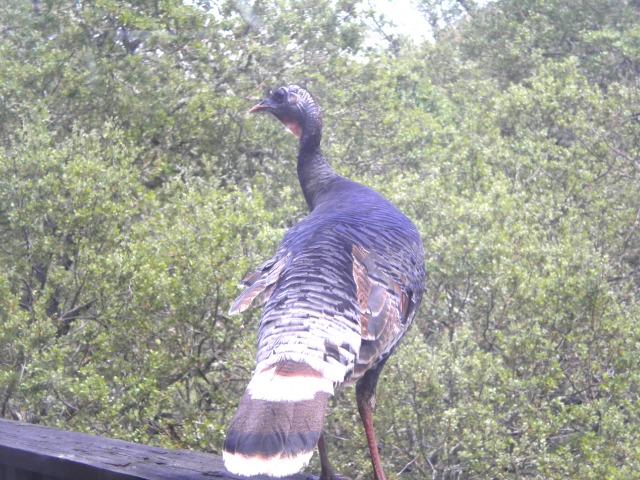 They land with a heavy thud and sometimes proceed to the roof where they sound like clumsy giants galumping about. Often we hear the frantic TWEE, TWEE, TWEE  when  one of the hens has been separated from her girl gang. Occasionally a hen appears with a trailing line of downy chicks following close behind. Sometimes there are as many as 15 and often only two.  The wild turkey has successfully bred and prospered in California, most likely because they can fly into the trees to roost at night.  But the Eggs on the ground and the first few weeks in the life of a chick before they can fly, is a time of murder and mayhem. I’ve heard the frenzied yelps of the coyotes at night and would rather not imagine the bloody scene. 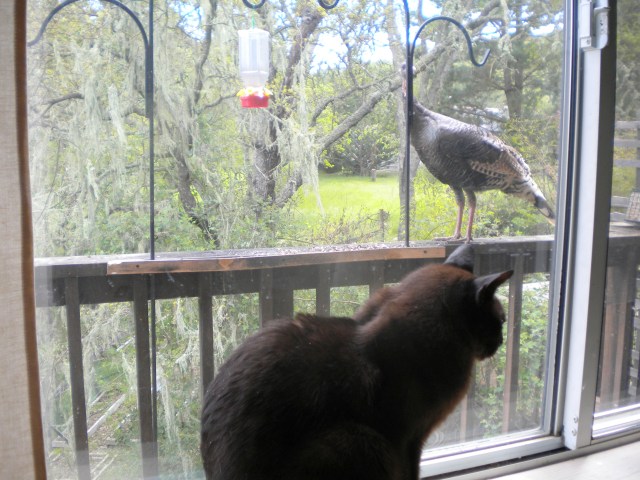 That has been our life with turkeys at Castenada Lane.  I will not miss them.  And yet, in the archives of Minnesota Conservation Volunteer magazine I find that “Today there are more wild turkeys in Minnesota than there have been in at least 100 years.”  Oh well. At least I know their habits.

This entry was posted in Birds, Wild Life. Bookmark the permalink.