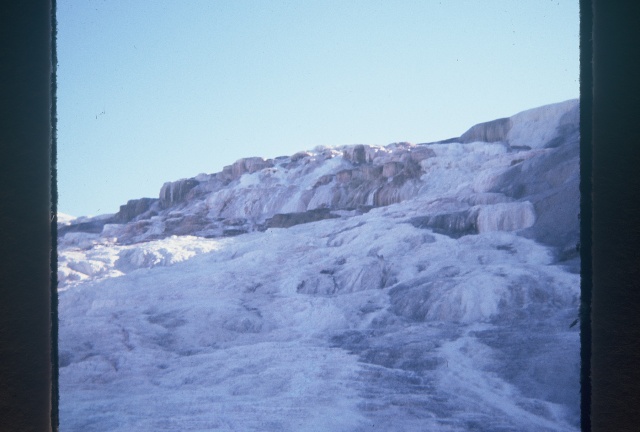 Geologically Frozen in Time at Yellowstone

Something major about packing all one’s belongings is that you end up awash in memories.  I am unearthing the strangest things – like the list entitled “Our Plant Family” which was drawn up by my son Kevin, most likely at the age of 10 or thereabouts. It includes the names of 34 houseplants which gives you an idea of what a frustrated gardener does in an apartment and  incorporates the “naming fetish” which he obviously got from me.  The list includes “Living Room Residents” such as Theodora Fern, Molly Baby Tears, and Bonnie Prince Creeping Charlie.  And “Dining Room Inhabitants” such as Little Pig Robinson Piggyback, and Charlemagne Schefflera and Camille (who was obviously sickly at the time). And the “Kitchen Boarders” – Opal String of Pearls and Bacchus Grape Ivy along with their “Balcony Friends” – Titania Faery Rose and Yen Chinese Money Tree.  And so on.

I know I’m going much too slowly for this packing task and only because I am compelled to stop and read. But sometimes I turn up something of note that gives me a boost and seems to be speaking directly to the trauma and task at hand. Tossing papers alternately into the trash and into a “take” box, I came upon a class paper I once wrote entitled “Points of Crisis”.  Now there’s a timely topic!

One of the issues I addressed so long ago was the fact that I am eternally grateful to my parents for endowing me with the genetic propensity for SERATONIN.  From both sides!  Robert is really jealous.  And that is not to suggest that he swings to the opposite “depressive” side. Not at all. It is merely because he especially likes to be around happy people.

Everyone has problems and stress issues, but people who tend to “depression” must have a harder time I think, because depression is a condition of inactivity – being “stuck”, shutting down.  And while people with high levels of seratonin have just as much stress and their own points of crisis,  they tend to  react with “activity” – whether its endless ruminating and worry,  pacing,  the proverbial wringing of hands, all manner of anxiety. Well, that’s me.

And my two-bit philosophy in this class paper suggests for what it’s worth,  that its easier in the long run to deal with points of crisis when there is movement. And before I get pummeled by some philosophy or psychology major, think of an object in flight.  One little nudge will get it moving and propel it quickly in another direction and with far greater ease than if the object was stationary and “stuck”.  So with conflict (as in Moving Madness) I think I maybe suffer just as much as the next guy, and so I have to admit that I am most fortunate to have a traveling companion who always gives me the exactly right nudge and,  thank you Jennings and Harriet, I’m wringing my hands and pacing, I think, into some good resolutions.

This entry was posted in Family, introspection, MOVING. Bookmark the permalink.