We woke in the night to explosions in the sky and Big Bang Minnesota Thunder, so it was at first a bit iffy as to whether the skies would cooperate for the gathering at the Lower Wild Rice and Red River Cemetery this morning. 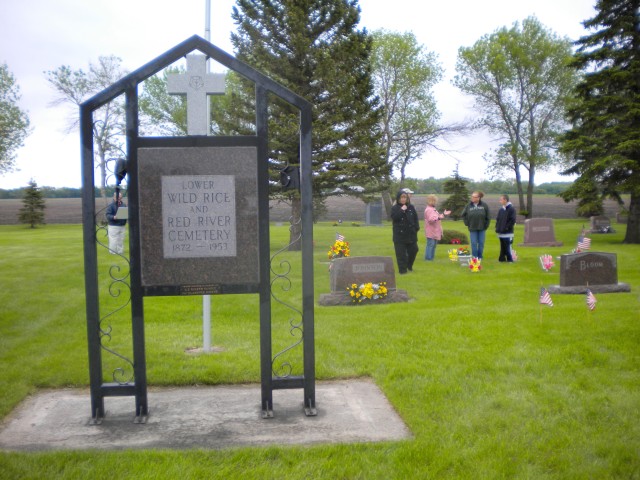 It’s a unique and moving experience to participate in Memorial Day in a small town.  I’m sure there are comparables in the west, but even the American Legion Service Officer who gave the address in the basement hall of the Lutheran Church in Wolcott, North Dakota today, noted that participation out in the country cemeteries was far greater than even in Fargo.

We drove this a.m. first to Hickson with Aunt Lil and cousins Debbie and Rick where I put my first picked lilacs from the yard on the gravestone of my father.  His name was the first to be read – a veteran who died right after the second world war.

Our family, in fact,  could lay claim to the most veterans in that small country cemetery – Uncle Earl, Uncle Billy and cousin Chuck. 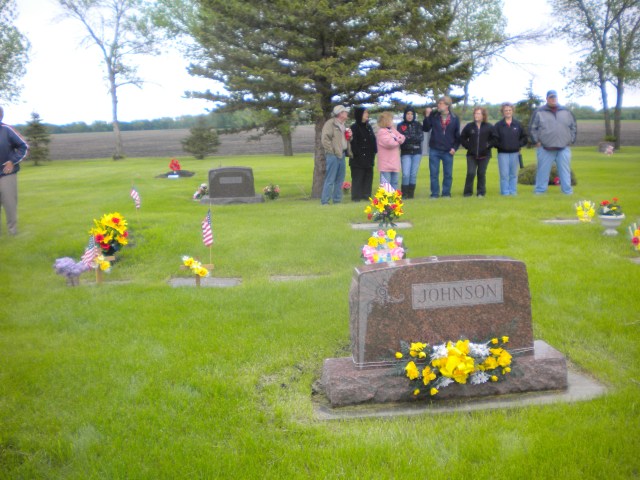 There were commemorative prayers of course, and the always impressive rifle shots at the end, by some old-school and elder veterans.  It was my opportunity to meet and re-meet some of the locals who recalled my Mom as a young girl and Henry Nelson playing his accordian in the summer evenings.

From there we went to Wolcott and had more testimonials and music in the church hall and partook of scalloped potatoes and ham and corn with a multitude of pies.  This is one of the reasons that we moved to this sweet and pure little slice of Americana.  Again, I love California with it’s hip and cutting-edge ways, but this is a return to roots and all that is great and good about community and trust and decency.

And beyond that and more specifically – It’s all about family.

In Memorium to Harriet, Effie, Chuck and Sarah

Johnson's looking down from above

This entry was posted in Family, In Memorium, introspection. Bookmark the permalink.