We started this past Sunday at the Unitarian Church of Underwood, part of our sampling of the local spiritual venues with a nod to something other than just Luthernism which of course abounds.  Their service this day included a discussion about community and that was an apt and most personal subject since it encapsulates an important  reason we are here in Minnesota.  Not that we haven’t ever experienced a sense of community at places in California, but I think it becomes harder and harder to find.  There is much to be said for the Midwest, Lake Wobegone, and an old-fashioned sense of coming together.  Perhaps it’s the weather which, as we are discovering ranges from extreme to extreme, so that there is more of an actual need to be less insular, to “be there” for one’s neighbor as one would have them “be there for you”.  Perhaps it’s something we haven’t even yet considered.  But Community does seem to be stamped into the DNA of these people somehow.  And we like that.

Yet if I had to put it to the test, bring the whole concept into my personal reason for this drastic uprooting move, I would name it Family.  That’s the type of community I longed for all my life out there growing up on the coast.  And that was a number one reason in this reverse return.  So – it was a perfect ending to the day to go to the Clay County Fair where my cousin Ross (on my father’s side) was awarded the Friend of the Fair Award for 2011 and my mother’s cousin Lynn was given a posthumous award and inducted into the Hall of Honor.  Pardon me if I indulge in a bit of genealogical pride – BOTH sides represented with the highest honors! 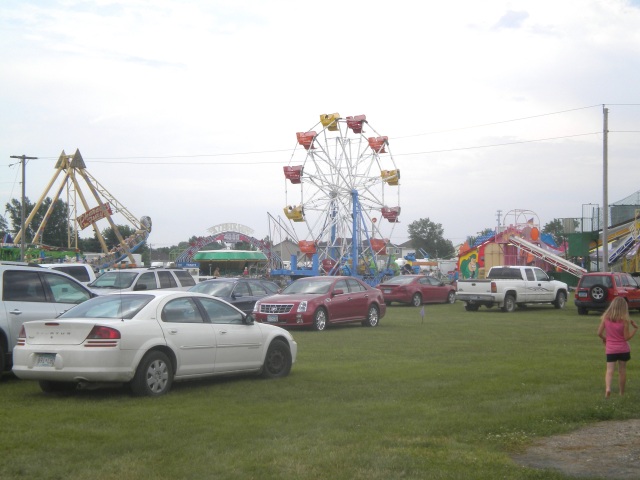 There is nothing quite like a small county fair.  It’s nostalgic, sweet, and brimming with good values and virtues which seem to have escaped much of the modern world.  It’s enchanting to see Ross’s granddaughter Hannah take a first prize for her chickens and her younger siblings doing more than their part in the 4-H program – following in the family tradition. 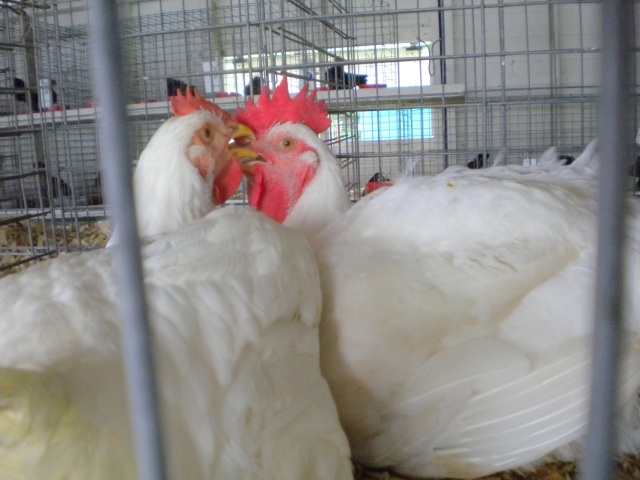 Hannah's blue ribbon birds having a tete a tete

My cousin has exhibited at this fair since 1950. 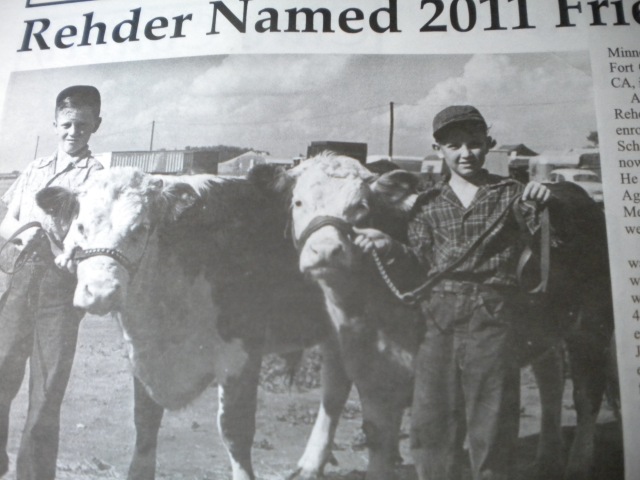 Ross and brother Curt with their Hereford steers

He was superintendent of the swine barn for 35 years and a member of the fair board starting in 1968.   In fact, it is regarding pigs that I think of Ross and I mean that in a good way.  Our trip “back home” in the 1970’s included a celebration of Ross’ new litter and my children were enthralled. 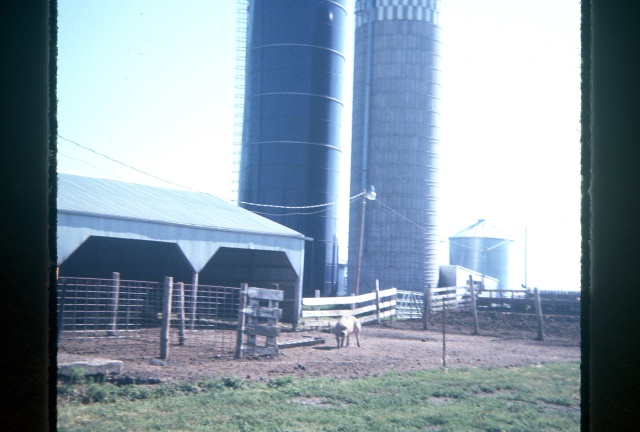 And it’s all about family and good old fashioned values. 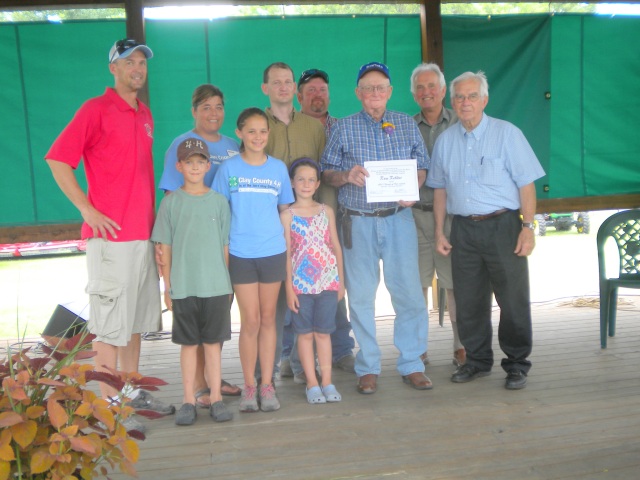 The Winner and Family!

They say the acorn doesn’t fall that far from the tree.  Thank you Uncle Ralph and Aunt Lilah.  You’re a big part of the reason why we are here. 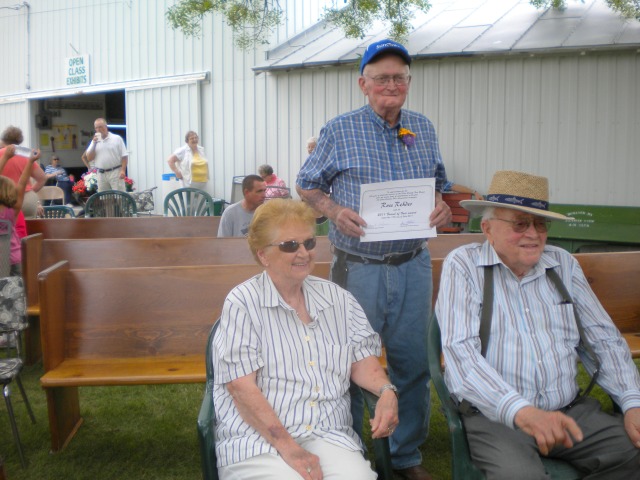 My mother’s cousin, Lynn was really more of a little brother because Harriet lived her whole childhood in the Anderson home and the same sweetness that was indicative of my mother’s demeanor was true too of Lynn. 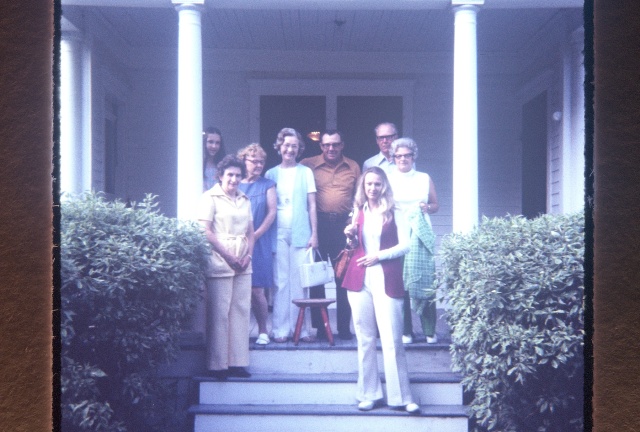 When various friends and relatives went to the podium on Sunday to tell tales and sing his praises there might not have been a dry eye in that arena. 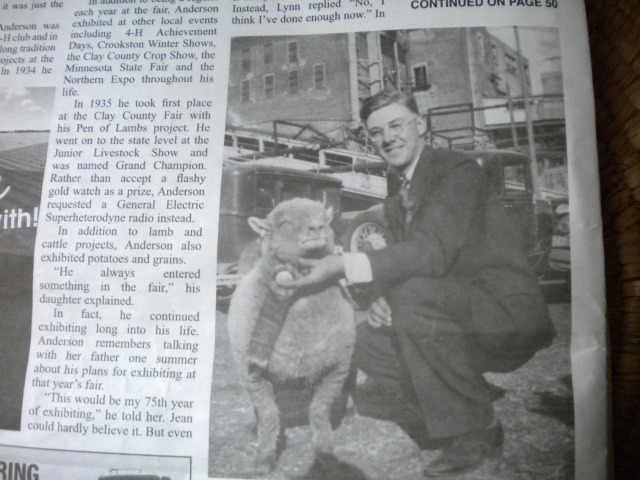 Mr. Soybean, as he was known, exhibited for 74 years at the Clay County Fair and only declined to show on the 75th because he didn’t want a fuss to be made of that milestone.

But I loved what my cousin Curt added when he asked what would be the three words that Lynn would most be remembered for.  The answer is “Yep, yep, yep”.   Well said.

This entry was posted in COMMUNITY, Family, In Memorium, minnesota life. Bookmark the permalink.