Posted on February 27, 2012 by snowbirdredux 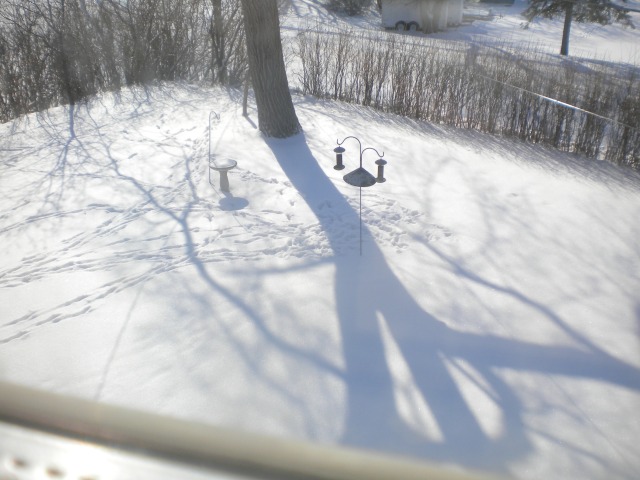 I was finally forced to get baffles for the bird feeders. They look clumsy and odd and spoil the welcoming appearance of our seed supply which is meant to be an attractive addition to the garden. The shepherd’s hooks rise and drape with alternating dinner stations – tubes, hoppers, platforms, baskets; sunflower, mixed wild, suet and thistle. I like their aesthetics. But enough is enough!

The Minnesota grey squirrels are less invasive, it’s true, than our California thugs. We were truly at war on the west coast as they ripped tiles off the roof, chewed my hammock to shreds, gnawed through a heavy ten gallon seed container, and played acorn hockey in the attic. And they stood and shrieked back at me when I chased them off the bird deck.

When we first came to Mt. Faith as veterans of  bushy tailed rodent hostility, we viewed the northern cousins as inferior combatants. When they shinnied up the poles, I greased them with Crisco. (Caveat: I thought I was so clever, but a Star Tribune birder advised against this practice which might lead to greased feathers!) If I said “Boo”, they ran for the trees. I read in my bird books that they evidently suffered a high mortality rate because of the harsh cold conditions ahead. So I waited with a ghoulish sort of anticipation, knowing that it might be only a matter of time.

It’s almost March and after a mostly brown winter with one major snow storm (yesterday), they are thriving. In fact, our yard is alive with frenzied furry tree rodents. They are everywhere and emboldened. The only time they seem deterred or fazed in the least, is when pursued by their runty, half-sized red cousins, who ferociously, furiously, and with lightning speed have them running for their lives. What’s that about? Google doesn’t say.

I am hopeful that our new mode of intervention will do the trick. These are Bird Feeders, after all.

This entry was posted in Birds, minnesota life, Wild Life. Bookmark the permalink.