When Liz called to tell me that there was a field of orchids near her house at Jewett Lake and I had to come quick, I had no idea just how memorable that find would become.

First of all – wild orchids in Minnesota! Aren’t they the provenance of South America, Florida, Hawaii? Exotic beauties in the wild? Treasures for pleasure seekers? Booty for renegade plant dealers who troll for fortune? Tropical south climes gems?

I couldn’t imagine that these extraordinary glories just might pop up in the Minnesota wetlands. And beyond that – who would believe that the cypripedium reginae is the Minnesota state flower! Yes. It is.

When rampant all-over-the-hills poppies are the state flower of California, how is it that the symbol of this northern state is endangered and highly elusive.

Not only that – it is only one of 43 orchid species in Minnesota. Orchids in the far north?  Now I’ve heard everything.

But it’s true. And, bless their hearts, these beauties might be over a 100 years old. And take up to 16 years for their first flowering. And each year throw out half a million seeds, fine as flour dust. And yet, be endangered.

They flourish in spruce and tamarak bogs, swamps, wet meadows, wet prairies, and cool damp woods. Well – that’s much of Minnesota. But they suffer and die from artificial drainage, road construction, herbicides, and yes, poaching.

When Susan Orlean wrote a piece, “The Orchid Thief” in the New Yorker a number of years ago, it eventually led to a book that spawned a film entitled “Adaptation” with Meryl Streep, Chris Cooper ;and Nicolas Cage. It was about a renegade plant dealer, John Laroche, who searched for a ghost orchid in the wilds of Florida swamps.  It was not unlike following the passion of a committed user/drug dealer who followed his bliss.

When Liz last week, called about our local “Ladies Slippers” I caught the bug, thirsted for the high, craved the fix, longed to bliss-out on it’s charm. 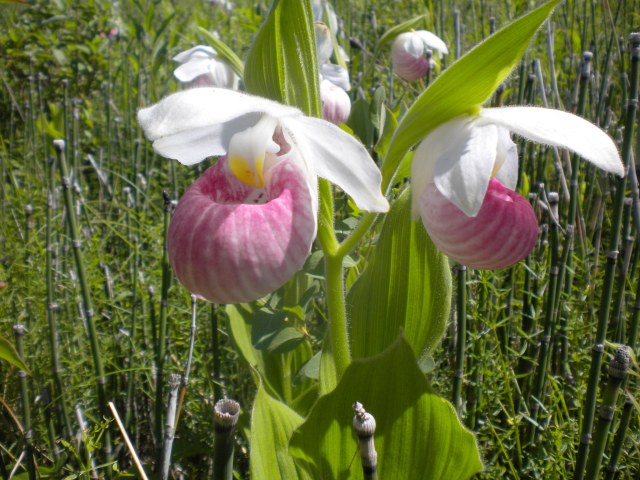 And I promise that I wasn’t a thief.

This entry was posted in favorite things, Gardening, minnesota life. Bookmark the permalink.