Posted on November 7, 2014 by snowbirdredux

This will be our fourth winter in Minnesota.

The first was unusually mild and we thought – “Well, this isn’t so bad. What’s all the fuss about?” Plus we were enamored with the novelty of it all. Ooh, look at the snowflakes! Icicles! It looks like the Snow Queen’s Palace. Brrr. Shall I wear my snowshoes to refill the bird feeders? Oh, fun! 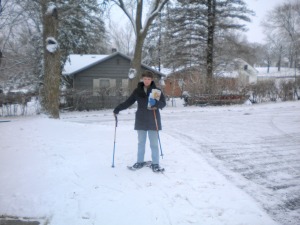 The second winter was “snowier” than usual. So we were told. And we watched as the drifts began to bury the birdbath and smother the garden stairway. The snowplow knocked the mail box askew and our shovel was always at hand by the kitchen door in case we needed to exit the house. Fortunately that winter, we didn’t need to travel out and about very often, so we hunkered down and I baked bread and we caught up on our reading agenda.

But last winter descended upon us with record cold so that we recoiled while wondering, “what were we thinking?” when we moved from coastal California to the pits of hoar frost. That season I began to worry whenever I slogged down the driveway in order to dig into the snow bank for the buried Star Tribune, that my contact lenses might instantly freeze onto my eyeballs. One day I watched in horror from the dining room window as T.M. took his turn and as he gradually descended, suddenly flipped up and sideways and disappeared. Watch out for the “black ice,” they warn. You betcha.

I’m having difficulty assigning a point of view to the upcoming winter. I vacillate between all of the above. Anticipation. Worry. Excitement. Depression. When we were newcomers anything was possible and the thrill of adventure overrode any fears and spurred us on to heights of wonder.

Then we settled into the next phase, becoming one of the tribe and sharing that knowingness that we were inured and capable and yes, we understood the gravity of this Nordic life, but we had passed the initiation and were “cool.”

The past winter our collective resolve crumpled a bit and I, at least, was in limbo, walled in with the grays and often claustrophobic.

Now it has come round again and I wonder about my resolve. I know I’m not ready. But today I concentrated on putting the final beds to rest. I stuffed plastic bags with fallen leaves and staked them about the roses. I raked the rest, the downfall that had not been mowed for the grass, across the lawn and into the perennial beds for mulch. The last of the garden ornaments were stashed in the shed. The stone bird bath was shrouded with a cotton rug and plastic bag. I stuck a piece of the water hyacinth into a vase in the kitchen window so that it could be resurrected in the pond next spring. The hanging geraniums were stashed in the basement.

Just in time. Today the snow began to fall in big flakes and Paul Douglas, the Star Tribune weatherman began his daily column with the headline – “The S-word” and continued – “I expect it to be cold, crystalline, slushy at times, slippery to the touch, a flaky-white appearance due to scattering of light. The mere risk of snow will cause some people to make irrational decisions; commutes mangled, tempers tested.” And he concludes – “Our weather honeymoon is coming to an end. Next week may feel like late December. Not. Ready. Yet.”

This entry was posted in Uncategorized and tagged Minnesota, WINTER. Bookmark the permalink.

3 Responses to NOT. READY. YET.