Posted on December 8, 2014 by snowbirdredux

When we decided that moving to the Great Northern Plains was the cure-all answer to retirement (considering affordable, far-from-California-cost-of-housing), it never occurred to me that we would be cutting ourselves off from so much time with our children and grandchildren. No problem, I thought. We often drove two to four hours for family get-togethers. Hopping on a plane would not be all that different in the overall time frame. Would it? But, as it turned out, the irritations about cattle call boarding, missed connections, lost luggage, fear of flying, squashed seating, and time zone mental travails, encompassed only the basic problem. As it turned out – flying was expensive.

And so, here we are, nearly four years later, with five short visits which engaged four of the extended family of eleven. In a world where Face Book trumps personal phone calls, even above email, we often feel bereft of connection. The Divas have grown from little girls into near women-hood while we’ve been gone. The grandsons are young men, out and about and into a world we know nothing about.

Sometimes I feel as if we’ve moved to the moon.

Yet we are blessed with an extended blended family that is a treasure. We moved to a community that brought us an abundance of friends. And if I am now too, too insanely busy, it is plunk in the middle of personal passions – gardening, writing, spiritual exploration, and community markets.

Beyond that, our move fulfilled my lifelong dream that I would return to roots and merge with the gene pool that propelled us here in the first place. As a Californian, I always wanted to go home. If not to Norrafinskoga, Skarvik, Haukanes Hordaland, or Toten, then to the Red River of the North on the upper prairies. I’m certain my cousins were always envying me, growing up on the beaches of Southern California, surfer girl (not really), cool kid (actually, more of a nerd), at the same time I was envying them as they played about the farm of our grandparents. Hide and seek among the corn rows. Building forts along the river. Climbing to the highest loft in the barn. Sledding and snow ball fights. Or so I imagined. And then sitting down together at Grandma’s sumptuous table. I so wanted to be them, be there with them.

Grandma and Grandpa are long gone, as are almost all the aunts and uncles. Many of the cousins have moved away to warmer climes. Or died far too young. The farm is currently being plowed up for a heartbreaking and misguided river diversion. The little town no longer has businesses, not even a grain elevator. Only the Knickerbocker Liquor Locker at one end of the main street and the Shepard of the Prairie Lutheran Church at the other.

But still we were 19 at Thanksgiving table in the old “town” house where Aunt Lil still resides. She made lefsa and flatbrod and buns. There were two turkeys and more side dishes than I can remember. In the family tradition, all the kids received a small crystal goblet with one sip of bubbly red wine in order to make the toast. Skol! 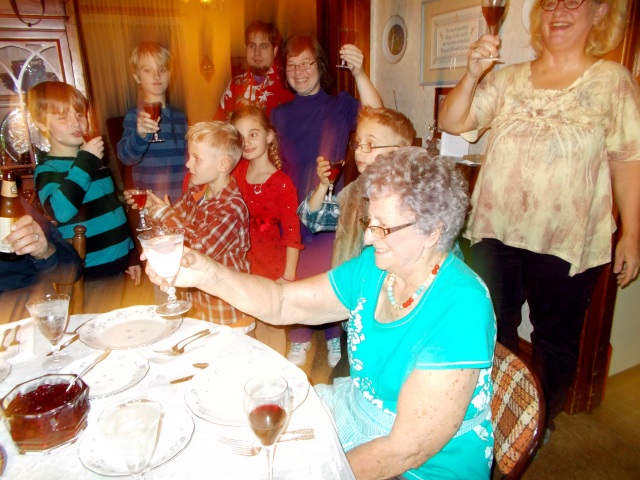 As I write this, the Canada Geese are circling overhead in massive, honking flocks. This morning the piliated woodpecker clutched and swung on the suet basket just outside the kitchen window while I kneaded seeds and grains into the whole wheat country bread of the week. My personal chef is making a pork tenderloin for dinner, with roasted beets, butternut squash and wilted greens. Button Bright was the perfect kitten choice.

Best of all, Noelle is coming for Christmas. God Jul!