Posted on February 8, 2015 by snowbirdredux 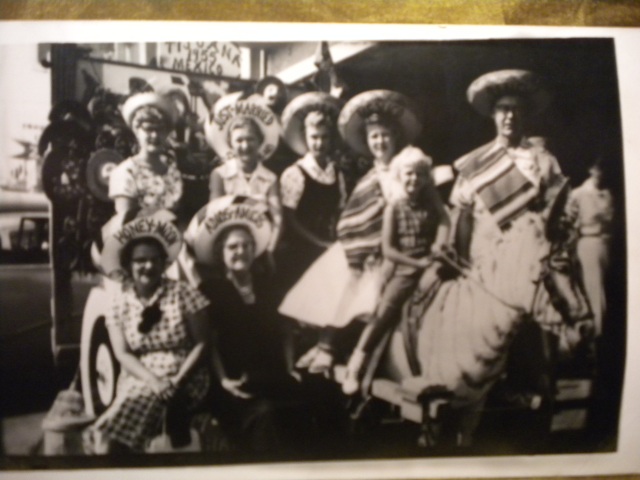 Before there was a Disneyland my mother established a touring agenda for out of state friends and relatives who visited our southern California home. We lived in Long Beach, which is south of the greater, spreading metropolis of Los Angeles. Along with the Pacific Ocean, a major draw in and of itself, my town was in proximity to wondrous attractions.

Long gone now, we lived just blocks from The Pike, a sort of Coney Island of the West with carnival rides, spooky funhouse, a boardwalk with exotic wares, an indoor salt water swimming pool fashioned after a Greco-Roman extravaganza, the oldest tattoo parlor in the United States and a wealth of cotton candy and salt-water taffy.

Knott’s Berry Farm to the south was in it’s infancy without the amusement park rides of today and consisted of a small replication of an old west town complete with saloon (sarsaparilla only), jailhouse, mercantile and train ride with cap-gun shooting bandits. There was a small chapel beside a man-made lake which housed a few rows of pews and a full length painting of Jesus with his eyes closed. When the seats were full and the chapel door closed, a recorded voice accompanied by the Moonlight Sonata in the background, intoned a short description of the Christ until at the final moment, through the magic of some special kind of paint and an early form of black lighting, Jesus’ eyes opened as the crowd gasped.

Our most exciting tour was inevitably south of the border to Tijuana with the added excitement of passing through customs into a foreign land. Down town we had our tourist pictures taken while sporting sombreros and sitting astride zebra painted donkeys, strolled the foreign streets past mariachis, purchased exotic souvenirs – hand blown glass vases, pottery candelabras, and highly decorated and embroidered felt jackets – and ventured into taco bars.

Our most heart-felt and mystical trip, however, was inevitably to San Juan Capistrano, considered the loveliest of the missions. The early California adobe structure is said to be the oldest building in the state. In my youth privet hedges lined tiled walkways in the garden and encircled splashing fountains. There were acacia trees and several varieties of blossoming oranges. I imagined the native tribes arriving at the mission, gathering in the sanctuary, happy to work the adjacent fields. The thick walls of the chapel suggested permanence and importance – a sense of sanctity and an other-worldly hush. And then, of course, there were the swallows. The migrating birds returned and returned year after year at an appointed time and had inspired a popular song, and thoroughly guaranteed the special-ness and magic of the mission. From the earliest age I thought it a romantic and enchanted place.

Capistrano was just one of twenty-one stops along the El Camino Real (the King’s Highway) and at one point in my youth, Lutheran though I was at the time, I vowed to make a pilgrimage one day, stopping at each of the missions along the length of the state. In college I was further entranced by a class in early California history which sparked my interest in the “romance of the west.”

I never made it to all of the sites, but I did visit Santa Barbara, which was large and more impersonal, I thought, than Capistrano. And the mission at Carmel which houses as a mini-museum, the seemingly small and insignificant personal room of Father Junipero Serra, the 18th century Franciscan founder of the line of missions. I visited a few others over the years, notably the most remote, San Antonio de Padua which is not easily accessible. One must traverse Fort Hunter Liggett off the major thoroughfare from the east or climb over the beautiful if sometimes arduous winding Nacimiento Road from the west. It appeared deserted on my visit, it’s passageways cold and even spooky. There was an eerie echo as we whispered and for some reason I shivered and was oddly struck in that moment with the thought that my childish romantic notions might well be a far cry from the reality of the history. Little did I know.

A friend recently sent me an article about the current pope coming to the United States this year in order to canonize Father Junipero Serra, and the uproar and outrage that is likely to cause to surviving ancestors of the native peoples who were enslaved by the mission system. Not to mention historians who are properly informed about this blot upon Californian history.

It turns out that the romance of the missions is no more a fact than the fun houses of The Pike, the shoot-em-ups at Knotts Berry Farm, the faux Jesus who opens his eyes, or the jollity that masked the emerging reality of cartel gangs in Tijuana.

Father Serra, according to the article published in Xasauan Today.com, “was the chief architect of a series of forced labor camps where California’s native people were enslaved, subjected to barbaric torture, and forced to live in crowded, unsanitary, and disease-ridden conditions, where they died in overwhelming numbers.” The French explorer, Jean Francois de la Perouse, after visiting his first California mission noted that the natives were essentially slaves whose “state at present scarcely differs from that of the Negro inhabitants of our colonies.” And there’s more. Sadly much more.

The current pope appeared to be a welcome new direction in the Catholic hierarchy. He took the name of Francis, he said, because he cares about the well being of the poor. He has been lauded for attempting to build bridges with other backgrounds and faiths. He resides in the guesthouse at the Vatican rather than the Apostolic Palace like his predecessors and he has been known to kneel down and wash the feet of others.

I recently applauded him for taking a position on global warming. I’d like to be able to give him a pass and assume that he hasn’t done his homework in this case. When Pope John Paul II beatified Father Serra in September of 1988 (a pre-step to sainthood) there was so much unhappiness among the descendents of the tribes that (according again to Xasauantoday.com) “at a public meeting in California, native Americans, many of whom were devout Catholics, described, often tearfully, their extreme distress at the leaders of their faith proposing to endorse the mistreatment and murder of their relatives, and the destruction of their families and traditional culture, by sanctifying the memory of the man primarily responsible for those atrocities.”

When a Catholic historian took the stage to concede, but compared the beatings Serra dished out as “lenient beatings,” the meeting dissolved into chaos but not until after “old Ephraim Doner rose from his seat at the back of the room and, holding up his large oaken walking staff, shouted, ‘Come down here and I’ll give you a lenient beating!’”

I used the term “bless his heart” about Francis when I heard his stance on global warming. I’m not giving up on him yet. But I am praying that like the little girl who was entranced and romantic and didn’t know the facts, he will hear the eerie echo of the sad voices in the passageways and know the truth. And leave Father Junipero Serra in his earthly grave by the side of the alter at San Carlos Borromeo del rio Carmelo.