Posted on November 29, 2011 by snowbirdredux

Here at a bend in the Otter Tail River, there is a surprising phenomenon at play.  At least it is surprising to me, new to this clime and environment.  We expected the Canada Geese to have migrated by now, down to the south along the Mississippi flyway.  But they are still here and in greater numbers than in the spring and summer.  It’s as if multiple flocks from Canada stopped along the way for a respite on their migratory journey, and fell in love with our estuaries.  It’s difficult to describe the vastness of the scene.  The river along the bends are wall to wall geese.  The banks and the grass ways are inundated.  And at some point each day, usually in late afternoon, they take to the skies.  Not in the usual Vee formation, meant for serious travel, but swooping and honking in massive groups as if taking their daily constitutional.  There are thousands.  I need a wide angle lens and, better yet, Cinerama, to capture the magnitude and magnificence.

I’ve been told  that they will depart if and when all water is finally frozen. In the meantime, we’re captivated by the show.

The major surprise, however, is that one lonely and lovely Snow Goose is among the throng. I’ve been scoping her out every day as she waddles across the grass looking for critters along with the flocks.  Or floats and fishes in the shallows, a bright white highlight among the brown.  What I wouldn’t give to know her story.  Did she get lost and separated from her mate on the journey and now waits and grieves?    Like the Ugly Duckling, had she been an orphan raised by another species, continually suffering an identity crisis, not really knowing her own worth and beauty?  But stuck nevertheless,  betwixt and between?  Or has she appeared just to enchant me?

Point of white among the brown 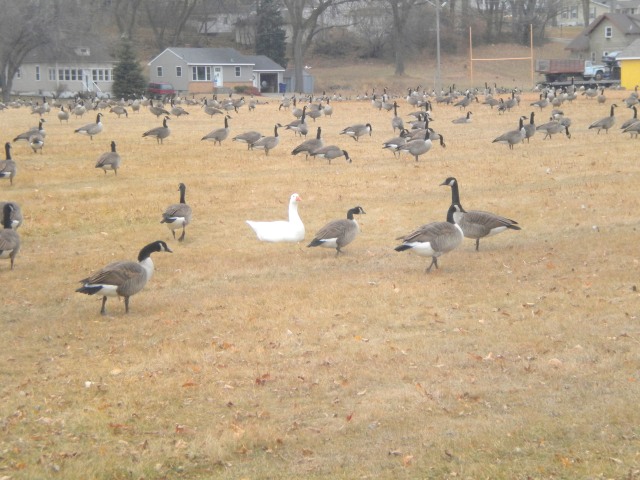 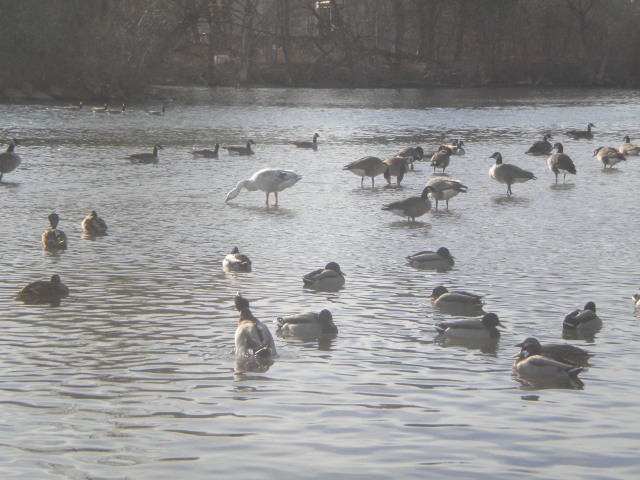 It was the Snow Goose that I really had in mind when I designated us the Snowbirds-redux.  Just the fact that the species has a mystic tie to the Aurora Borealis  (which I long to experience, now that we are living in the great northern plains) is enough for me.  And I knew from my favorite myths and fairy tales (and don’t forget Mother Goose!) that the Anser hyperborean – “the goose from beyond the north wind” – was my personal totem.  She represents for instance, the Writer, with the apt symbol of the goosefeather (pre-keyboard) and the designation of helping to “move through creative blocks and stimulate the imagination”.

I wonder if Phillip Pullman had that in mind when he  wrote the brilliant trilogy “His Dark Materials” and created the lovely and powerful character of Serafina Pekkala, the Queen of the Lapland Witches, whose personal daemon/spirit (or soul), was the Snow Goose, Kaisa?  I do know that he saw the goose as a symbol of vigilance and protection.  And the expanded realm of that grand tale incorporates all the mystery of migration and  the eternal quest, on both inner and outer levels of consciousness.

And so, here on Mt. Faith – another mystical omen.