Now and then one has a day, start to finish, which is replete and chock-full of the following descriptions:  excitation, novelty, apprenticeship, endeavor, jollity, friendship, enlightenment, insightfulness, and full-filling-fun.   Not very often, but this was mine.  So it was that I spent a recent day by getting up in the dark and hastily dressing in the warmest garb which I had chosen the night before  and driving to meet Meg and Betsy at their parent’s house and then proceeding on to Pelican Rapids and the annual sheep shearing at the home of Joanie and Dave Ellison.

Novice that I am, I just hoped to learn and be helpful.  I’m not all that sure of the later, but I did learn and it opened the door to a hunger for more.  In other words, I am now hooked on fiber.

It all began with Meg, who I recently met at her parent’s house as she was exhibiting a “ponchito” (or shrug) which she had spun and dyed (partially)  and knit for her mother.   Her spinning wheel was on display and the eight or nine yarns she had used to create this art piece were laid out in sequence, blending the loveliest peachy pink hues by contrasting wooly, sparkly, ribbon-y, and fuzzy.  About the same time I was invited to friend, Katy’s house for a fiber/knitting/potluck (see “Sheep, a Pig and a Circle of Women”) and soon thereafter  I began digging through the two large baskets of yarn that moved with us to Minnesota, untouched for two years and now unearthed in a pile of wooly color.

It only seemed natural, then, that I jumped at the chance to participate in the annual shearing day at Northcroft, home to Joanie Ellison, shepherdess.  In her book “Sheep to Shawl” she describes this process which begins each year  when Mel, the shearer shows up early morn and with the help of Joanie’s  husband, Dave, and assorted friends trims hooves, inoculates and shaves each fleece.  They are individually tagged and turned out onto a skirting table where other assorted friends ooh and aah and pick over and ready for eventual washing, carding, dying and  spinning.  Of course, it’s much more complex and a full, hard days work at that, and I felt privileged to be a part of it all.

Alpaca with the herd

It is awesome to watch the agility and artistry of the actual process.  The sheep is pulled up onto her rear end while Mel, with long, fast fluid strokes shears around her neck, down her belly, the inside of her legs, from the shoulder to the tail, the belly to the backbone, down the hind legs and in moments – whoosh – the sheep scrambles to her feet and a very large pile of luscious  wool lies behind. 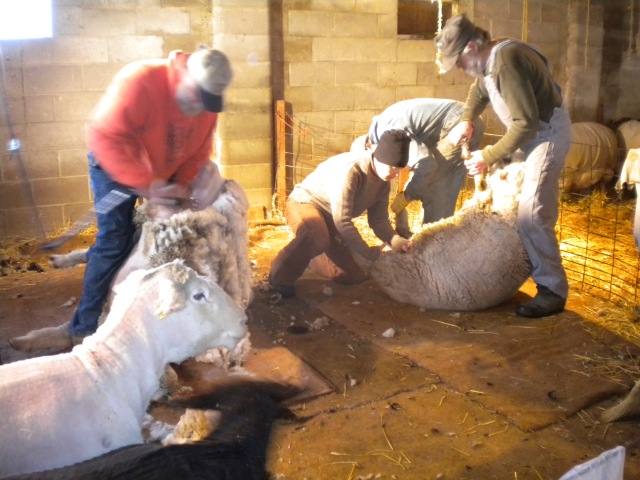 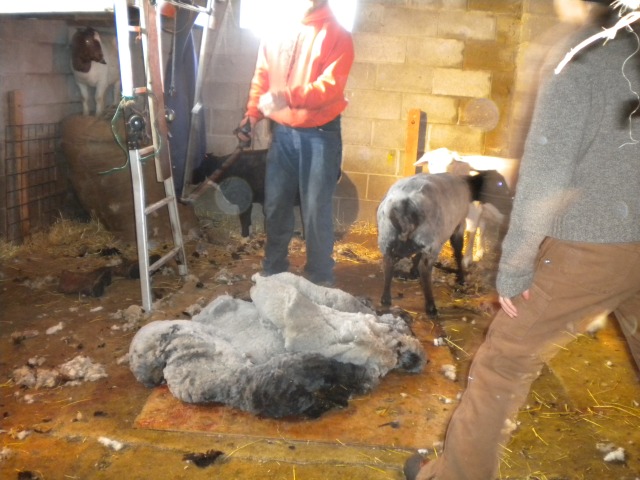 Each shear goes onto the metal skirting table and I stand about with other helpers, picking, picking, learning what to discard, what to celebrate. We pick off the little “second” clumps, the yellow urine stains, the pieces of straw, alfalfa and poop.  I’m introduced to “luster” and “crimp”. 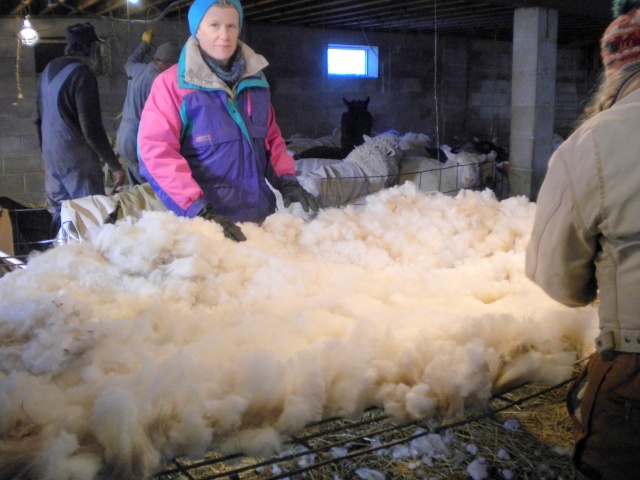 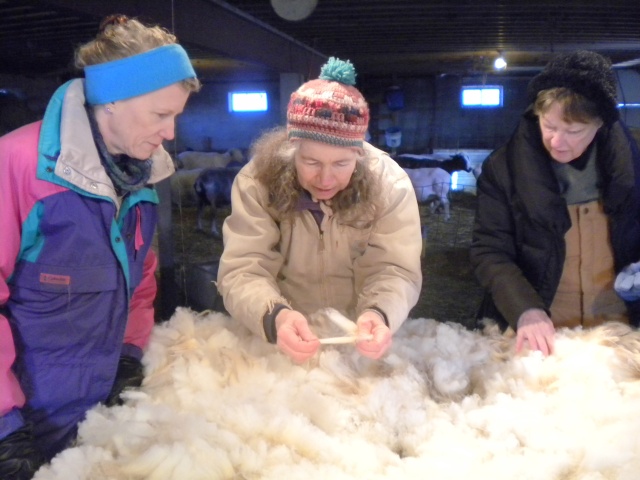 Getting a lesson on crimp from Joanie 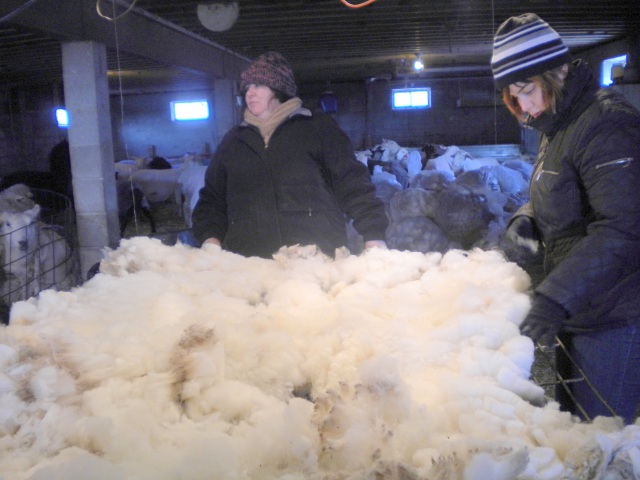 One LARGE fleece. Pile of bagged fleece, far back right

After a hearty lunch at the Ellison’s dining table, accompanied by yarn talk and other life tales, we return to the barn to shear and skirt until we have 41 bags full.  A lovely day’s work which is not to end until after I have returned with Meg and Betsy to their parent’s house for dinner – Liz, Don, T.M. and friend Mary – and Meg allows me to “ply” yarn on her spinning wheel! Now I’m really hooked.

Joanie Ellison ends her book “From Sheep to Shawl” by saying, “Who would ever believe that one could build or create a thing of beauty from tangles and knots.  As fiber people we do it every time we sit down at our looms, pull up our wheels, or pick up our needles.  As human beings, we do it every day of our lives.”

Clooney and Baby – Cover of “Shepherdess” by Joanie Ellison