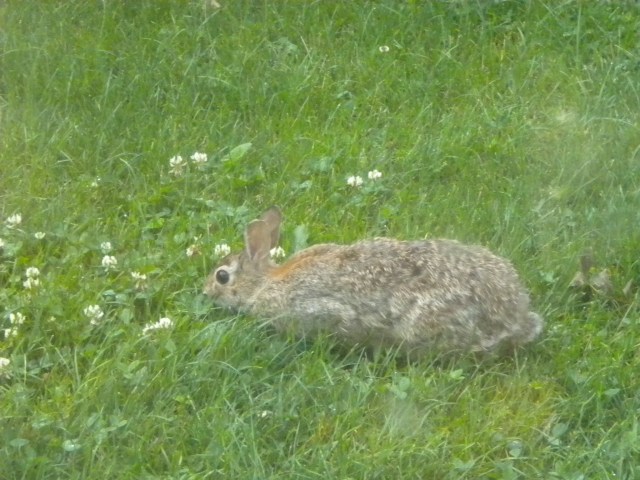 Yes. I admit it. I love to see the bunny. He nibbles and hippity-hops. He has a bunny way of chomping and chewing upon a long dandelion stalk: munch, crunch, crunch, down to the  bitter end. I long to stroke his lustrous fur, just to see if it is, indeed, like down, soft and cuddly. I rooted for him against the dreadful Mr. McGregor. I was transported to Watership Down. He was Alice’s very late, but quirky friend. I know who to thank on Easter.

Yet. On Mt. Faith. Hard as it might seem. He is my enemy.

Another interloper in the garden at Mt. Faith is the chipmunk. I had never seen a chipmunk in California. I only knew about Alvin, and I love his harmonizing. The chipmunk is so cute.  At first.

If I still ooh and aah over the bunnies, I have not continued in the same fascination mode with the chipmunk. Those little devils are eating us out of house and sunflower seed! I’m filling the feeder every day, just for him. The baffles on the Shepard hooks have deterred the squirrels. But not the chips. They can climb anywhere.

And they love to dig tunnels. Everywhere. I was appalled one day to discover dirt from my very high window box, ejected out and onto the ground. Two tomatoes have been compromised. The little suckers speed run all about the garden.

I know we could catch them in a havahart and take them far, far away. Although my cousin, Maryanne did just that and even had her husband, Jim paint blue swatches on their tails so she could be sure that they weren’t just circling back home. But no matter how many they caught in the trap, there were always more. Yesterday I saw one of the progeny upon the ground while the parent was gorging on seeds above. 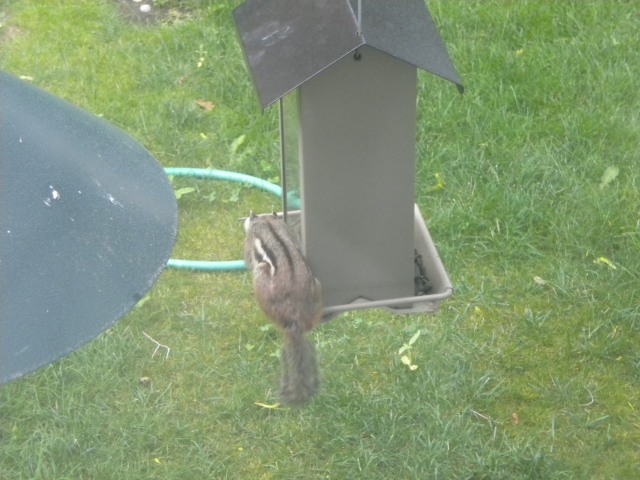 I googled chipmunk eradication and was appalled to see that one of the favorite means was death by drowning. It entailed putting out a 5 gallon tub filled with water which was disguised by a layer of floating sunflower seeds. Putting moth balls down their hole was another, but I’m not convinced that that is good for the birds and the garden environment. I did succumb once to throwing a handful of moth balls up in the attic because of the squirrels who were playing basketball with acorns above my head at night. I used to stick chewing gum down the gopher holes. So I guess I’m no goody-two-shoes when it comes to out-right killing critters.

And there is one varmint I am aching to kill right now and that is the bristly rose slug! I was aghast when I went out upon my daily garden patrol a few days ago and discovered the devastation. The horror. Poor Sven had been ravaged almost overnight. And just after I brought him Lena and Ole for companionship (who may also now be compromised by their proximity). 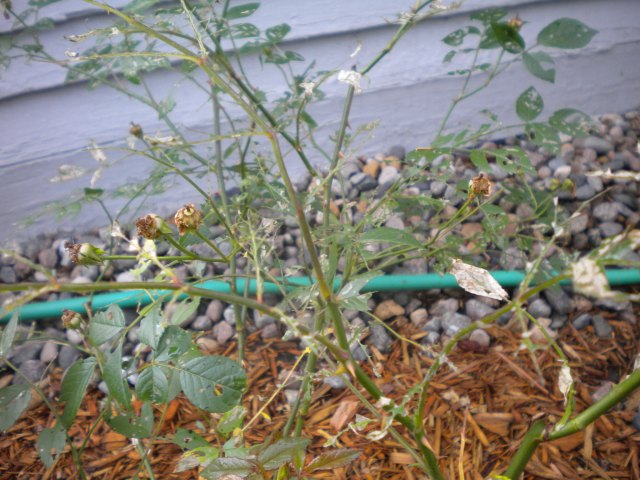 I hadn’t a clue about the perpetrator until I consulted my “Pests of Landscape Trees and Shrubs – An Integrated Pest Management Guide” which was our basic textbook when I went through the Master Gardener program in California. It took some time and perusal. The bristly roseslug (Endelomyia Aethiops) was new to me, in spite of the fact that I lived with over 50 heirloom roses in California. But all the signs were there (leaf undersides scraped, skeletonized, large holes eaten in leaves) if not the actual culprit. It seems that it might be necessary to go outside after dark with a flashlight and do some serious squishing and stomping. 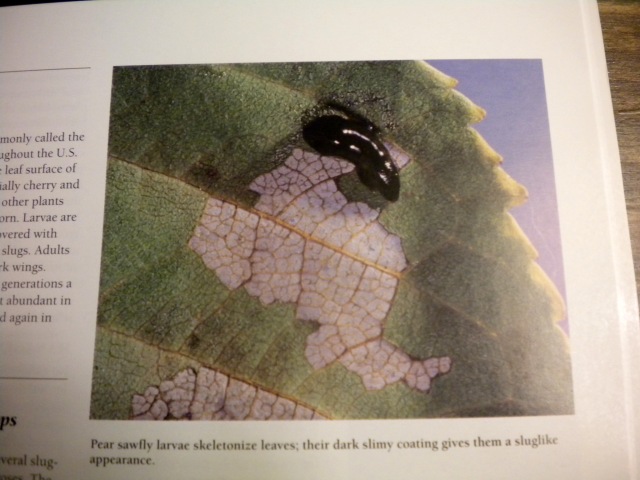 In the meantime, I’m spraying Sven (as well as Lena and Ole) with my homemade pepper spray (1 T. hot sauce mixed with water in a spray bottle) which should give the interlopers a jalapeno surprise. I’m also sifting flour about. Yes. That’s right. I read it on a number of web sites and I can’t imagine how or why it works. The guideline is to sift it about (hopefully on the underside where they congregate for lunch (or rather, a midnight snack) and then wash in off in 12 to 24 hours. It didn’t say anything about adding beans or cheese.

I have never experienced sawflies, which the textbook says, are not true flies, but in the order Hymenoptera, which includes ants, wasps and bees. They are named for the adult female’s “sawlike” abdominal appendage which is used for inserting eggs in foliage. The larvae then appears and munches. And munches. And, in the case of the rose variety (there are pear, conifer, willow and cypress) there might be as many as 6 generations in a season!

It’s going to be a busy summer. 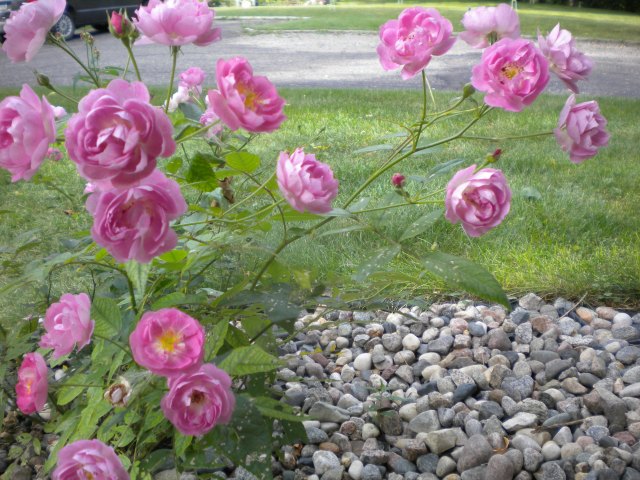 1 Response to THE INTERLOPERS