What’s wrong with this picture?

(Answer to be revealed.)

I must admit that I am borderline obsessive/compulsive. When I was a working girl  and had to count money at the end of the day,  spilling out the “bank” on the counter top, I was compelled to “choose” certain coins as they fell in a particular pattern. In other words, as I picked up the pennies to count – one-two-three-four-five – I first assessed the position where they lay and selected which to pick in which order. Think magic stones, thrown to tell one’s fortune.  It was something in my head that looked at the overall dispersal, that was compelled to work with a paradigm, that felt guided to choose on the basis of juxtaposition.

It’s not unlike the old childhood adage – “Step on a crack, break your mother’s back.”  What does it mean? Only that you are compelled. And your good choice or bad just might have consequences.

I am also obsessive/compulsive when I do the daily New York Times crossword puzzle. Which is a passion. I have a peculiar guideline which allows me to work ACROSS one at a time. And then work DOWN after I “get” a word. And I work through that possibility until it is exhausted. Then back to the second ACROSS. I feel compelled to follow my rules. As if the God of Crossword will not be kind if I deviate.

Another obsession has to do with the positioning of items in my house, and this comes partly from my mother who taught me from an early age, the lesson of harmony and balance. Whether it was objets d’art or just doo-dads, Christmas ornaments upon the tree, or books upon a shelf – Mom believed there was a necessary “ratio”, a sense of symmetry and proportion that matters. Most likely it is partly a Libran Thing, this need for balance (we were both born in October) but I am obsessive about it to this day. I can’t walk through a room without nudging a candlestick or figurine just a touch this way or that, usually with some sort of triangulation in mind. I do it unknowingly in other peoples houses. There, I’ve said it. And I apologize if you ever caught me fiddling with your décor.

And while I’m confessing, I might as well admit that one of my favorite, regularly trotted-out words WAS “juxtaposition” until my husband pointed out that I not only over-used the term but should consider that it sounded pretentious as well. I rather like the word. It has a strong, yanked about, take-no-prisoners sort of sound. It means business. And it defines more than a modicum of my life quirks and dispositions. It’s fun to say in the same way that antidisestablishmentarianism was in the fifth grade. But now that I am actively exorcising it from my daily conversation, I can see more than ever, just how important the concept is to my world.

When we first arranged the downstairs here on Mt. Faith we put a lot of thought into the usage and possibilities. The kitchen, bathroom and guest room were just that, but the other three small-ish rooms needed purpose and definition and they defied our initial attempts to push and pull our life into some semblance of order. Eventually we settled on a scheme, joustled our possessions about and began to entertain friends and family. Yet over the course of the winter and spring we found that no one wanted to sit in the “living room.” They just breezed on through into the “sitting room” (with our two big cushy chairs) and we were forced to pull in extra seats and accommodations. I could only believe that there was something drastically amiss with the – shhhh – (“juxtaposition”.)   Or maybe the feng shui or the strophe and anastrophe or the ellipse and parabola. Or could it be the hyperbola?

There is no doubt, however, that the so-called living room was off-putting from the first moment of introduction.

Do ya think? The first impressions say “barrier” and not “welcome.”

I am happy to report that the downstairs now breathes and flows and Mother would definitely approve. 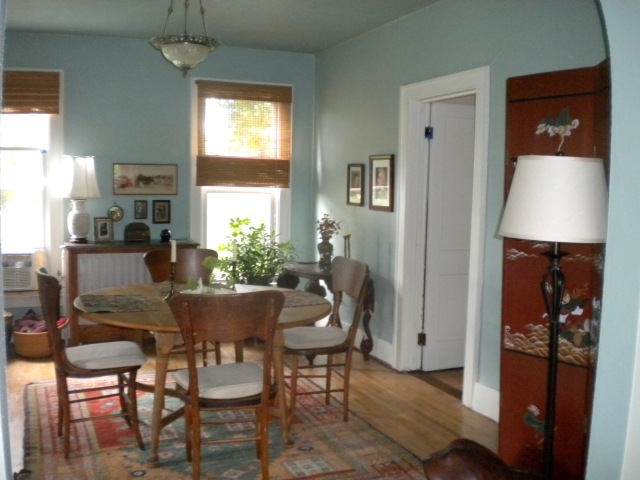 Better as a dining room. 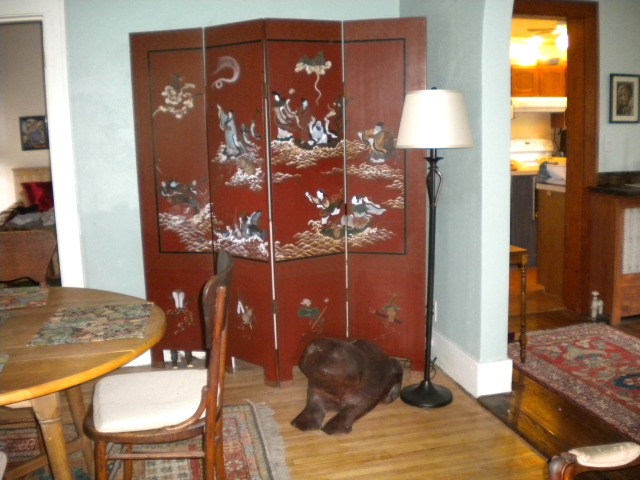 The DEVA in his new welcoming spot. 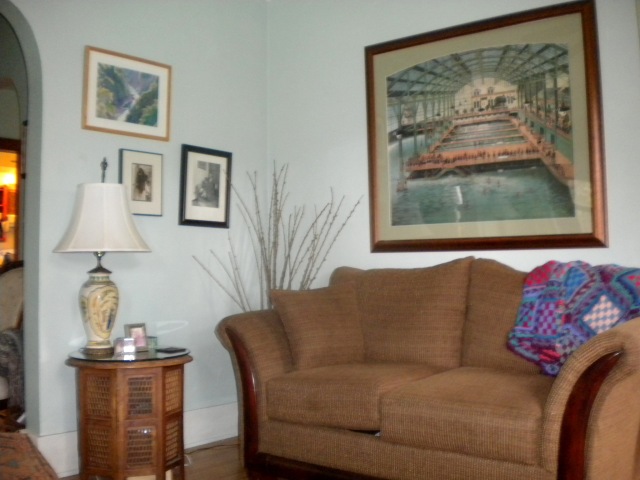 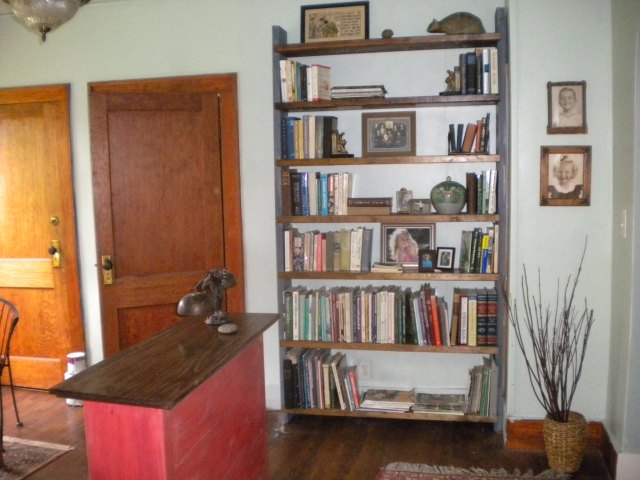 And what about the mystery picture?

When T.M. replaced the small window last year and the old wall crumbled all about the hole, he built a window box to hide the scars. That was nice, but it’s – “relationship” – to the back door seemed all squished and wrong. This summer I planted the two tubs on the left, hung a lovely potted plant and “balanced” it off by hanging an old horse’s pelvis that we found on a ranch in New Mexico – bleached and so Georgia O’Keefe. On the right side where the not-so-decorative hose reel resides, I decided, as our old friend Trudy used to say, “if I couldn’t fix it I would feature it.” So I nailed up, with what I hoped was “symmetry”, an antique metal wheel and asked for help with the hanging of the bells to balance the “proportion.” However, I didn’t stick around to stand back and call out: “No. More left. Down. Back up a little. Too much. Farther left. YES. Perfect!”

Do you see it? The small thing hanging off the roof on the far right?

Oops. Maybe I need a therapist.