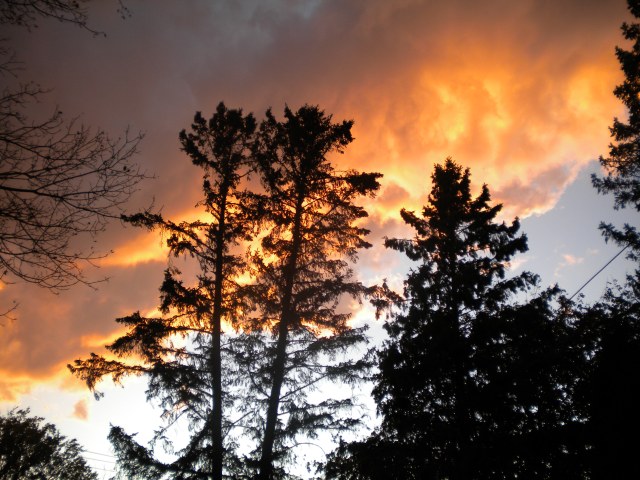 Yesterday the computer “went down” (as they say) just at the moment that T.M. called from the next room to tell me the television had lost it’s signal. When I attempted to call Ottertail Telcom, the local “bundler,” the phones were dead. And my cell phone needed charging.

Two hours later I spoke to a technician who was puzzled by the interruption. He did some configuring of signals from afar, tweaked electromagnetic dials for all I know, hemmed and hawed and finally, reestablished contact with whatever force it is that courses through wires and space.

He said it was “suspicious.” I say it was solar flares.

In case you haven’t heard, an area on our Sun which is named AR 11748, erupted over the past 72 hours with 4 massive flares in the X class (the strongest), one of which is equivalent to the force of a billion hydrogen bombs. NASA assures us that “even if they don’t destroy our planet, solar flares and coronal mass ejections can impact life on earth.” Need I spell out G U L P?

When I googled the event, of course I came across a number of End Timers, who were thrilled to tsk, tsk about our retribution and the fact that we have sinned and didn’t pay attention to the signs. I also learned that the flares could cause blackouts through geomagnetic storms  with huge waves of charged solar material striking the earth at millions of MPH. For some reason, and I honestly don’t think I’ve sinned, they struck my house.

What if the Sun was looking down at all the pollution and spilling of Co2 into the atmosphere and poisoning of our oceans, and just went ballistic? “What are they doing, those idiots? I give them a pleasant orbit and the warmth of my rays and they mess it all up.” Picture his version of taking off his belt and giving us a good lick or two. And grounding us with no TV or video games for our folly.

I am it’s true, a proponent of taking care of our planet. I recycle and refuse to use nasty chemicals in my garden. I blah, blah, blah to whoever will listen, about the problems of GMO’s and the need to save the rain forests and the polar icecaps. I plant asclepias and monarda for the bees and butterflies. I don’t believe that the Sun meant to target me personally. After all, it’s difficult to pinpoint Mt. Faith on the Ottertail River from outer space.

This entry was posted in CYBERSPACE, global warming, storm, WEATHER. Bookmark the permalink.

1 Response to THE X FACTOR