Posted on December 16, 2011 by snowbirdredux

Last weekend my cousin Debbie and I got a lefsa lesson from Aunt Lil.  It may be hard to fathom for those not of Norwegian descent, but lefsa is highly prized and desirable as part of the Scandinavian cuisine.  It’s the Norski Top Chef gold standard.  At a recent Habitat for Humanity charity dinner in Minnesota, we were surprised to see among the silent auction items (oil paintings, antique buggies, wood carvings), three small zip-lock bags with bids of $7 to $10 each!  It appeared that each parcel contained maybe four pieces of lefsa.  At first we imagined that each “sampling” represented what the winner would receive with the actual amount many times greater – certainly enough to cover the entire Christmas season and feed a multitude.  But no.  Each bid winner would receive only that very small packet.  And glad to get it too.

Lefsa is similar to a flour tortilla but made primarily with mashed potatoes.  It is eaten “as is” with dinner, rolled up with butter and brown sugar, or filled with anything of your choosing.  A cold meat ball is divine.

How could something so tricky to mix, roll and grill have been mastered in log cabins and on wood burning cook stoves all over the upper Midwest?  I can handle a pie crust with aplomb and occasional kudos, but lefsa has brought me to my knees.  My first experience was thanks to my friend, Florence, who kindly gave me carte blanch to her kitchen, handed me the mixture and rolling material, turned on the griddle, and let me fly.  What mostly flew was the flour, which ended up in drifts on the table, the floor and myself.  The mixture mostly stuck to the rolling pin, the board, and the grill. The resulting lefsa  (what I was able to salvage) was thick, tough, and frankly, embarrassing, but Florence graciously  accepted her “half share”.

Last week I tried again.  My cousin, Debbie, and I struggled through a day of lefsa boot camp and it was humbling, hilarious and ultimately, not so bad.  We followed Aunt Lil’s guidelines assiduously and with a bit more practice we might even eventually graduate.

In the meantime, we did master the arts of Mixture Sticking To Board and Pin, Screaming, and Flour Throwing (definitely a no-no in Aunt Lil’s kitchen!).  We vowed however, to continue, because some day it will be our job to pass it on to Noelle and Aspen. 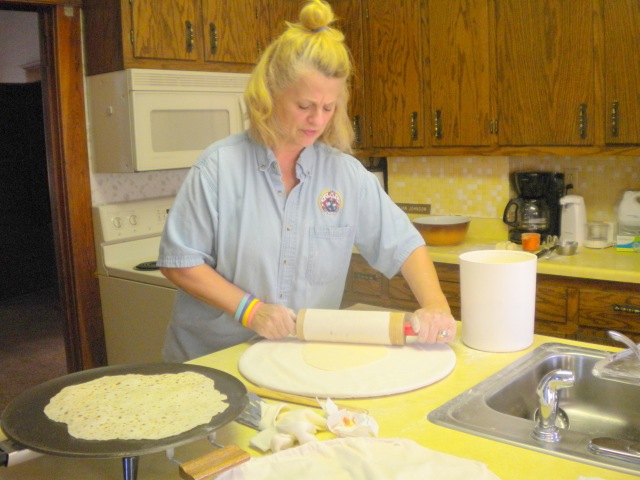 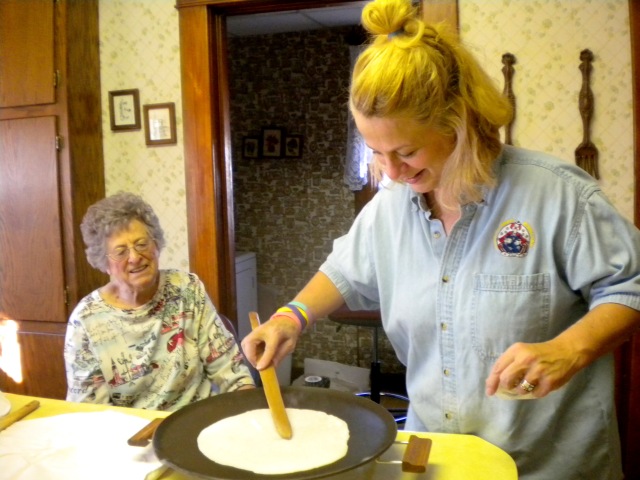 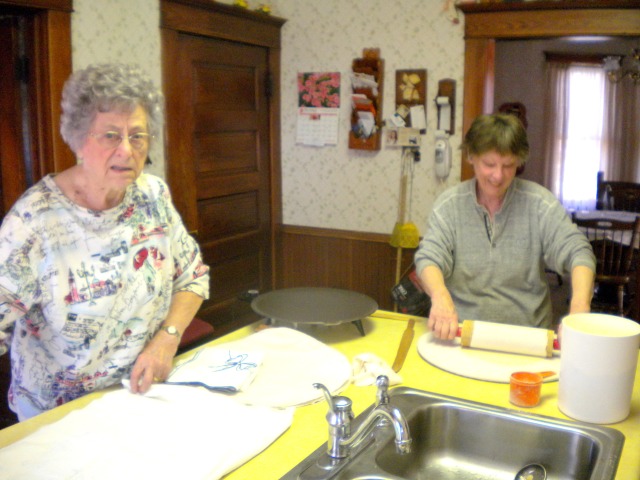 And – should you dare to try –

Measure out 3 cups of mashed potatoes at a time and add 1 cup flour to each batch.   Mash together well. (you can’t overmix, she said!)  Roll it out with your hands into a log, making sure it is very solid with no gaps.  Cut roll into 10 pieces.

On a lightly floured board, or better yet, a round cloth rolling board with diameters pre-drawn, roll each piece out gently with grooved lefsa pin, “letting the roller do the work.” The pin can be covered with a rolling pin “sock” which, when lightly floured, will aid against sticking. (Yeah right!)  At approximately 6 inches, lift roll carefully with wooden thin stick (lefsa stick)  or spatula and sprinkle additional flour (Not Too Much!) underneath before turning over.  Roll your pin on board to catch up extra flour. Continue rolling other side.  Fourteen inches is good.  Twelve will do.

With lefsa stick, carefully lift through center and roll out onto griddle set at 500 degrees.  Turn when bubbles start to form, and continue on other side until you see brown “freckles”.    Place each lefsa between towels and build a small stack.  Transfer to other towels as you go and gradually spread them out, leaving them covered as they cool.  When cool they can be folded in fourths and placed in zip lock bags to freeze – or spread immediately with butter and brown sugar.  YUM!